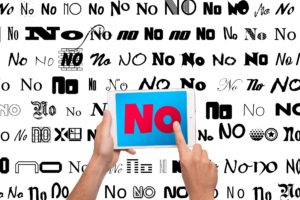 It’s a strong word for anyone during their career. NO is a setback; one that has the power to change your perspective of your career goals. However, it doesn’t have to end that way. You can harness NO and use it as a vehicle for success instead of setback.

Everyone hears NO at some point in their career.

NO appears at one point in time in everyone’s life; it’s inevitable, just like change. It may come from a job that you didn’t land, a client that went somewhere else, or even a lay off due to no fault of your own.  Since everyone will hear different versions of NO in their career, it’s important to ask if the NO is valid or invalid.

Is the NO valid?

If it’s valid, then the difference between people who bounce back from NO and people who do not is the ability to take it in stride and use it to pinpoint any areas they may be lacking. Instead of taking the NO and using it as a setback, they use it as a map to continue and move forward.

Is the NO invalid?

If the NO is invalid and not based on any necessary improvements or irrelevant, then the best thing to do is ignore it. While this may seem difficult, it is the best way to move forward in your career without being setback by an invalid NO.

NO is hard, even for seasoned professionals with years of experience. As you progress in your career, it becomes easier to distinguish between a valid NO and an invalid NO.

LinkedIn: Useful for Everyone

Ring in the New Year with Happy Employees
Scroll to top